Bayonetta is a hack and slash game where you play as the titular Bayonetta, an Umbra Witch who pummels, guns down, and eviscerates angels. The game relies on a light and heavy attack system similar to other games in the genre, but also features shooting, which can be used to interrupt enemies and chain longer combo sequences together. These three actions, when combined together, can create some deeply satisfying combo chains that are visually satisfying to watch and equally fun to pull off. This is tied together with Bayonetta being a character who is highly sexualized, but wields her sexuality in such a way as to weaponize it against others. She’s fully in control and isn’t shy to tell anyone about it. Bayonetta’s dominance melds really well with the game as you are rewarded for your performance in levels with a ranking system. The better your performance, the higher your commendations. Bayonetta at it’s core is a game about mastering the game’s systems and mechanics while displaying your skill in an ultra violent ballet of carnage.

Bayonetta is a fantastically paced game. Between all of the highly intense and visually satisfying spectacle is quiet time. The quiet time manifests itself in the form of a quick cut scene, a simple puzzle, light platforming, or a brisk stroll past some scenery. This helps to both punctuate and accentuate the frenetic moments of Bayonetta making them even more gratifying. The action has a stronger feeling because you aren’t numbed to it through overexposure. What is doubly good about these bits is that the game never dwells on them. You get a quick breather, get your bearings, and then you nose dive straight back into the game. Bayonetta is never overwhelming as a result and demonstrates an excellent sense of pacing.

Bayonetta is a game I was originally off put from buying due to my perception of it being a difficult game. I still think it is, but what people don’t often praise Bayonetta for is the way it implements accessibility. No really. Bayonetta has both an easy mode with and without regenerating health. Additionally, there is an accessory that can be used in both of these difficulties that will allow less savvy players, or those with physical disabilities to play the game one handed (or two handed with both hands using only a single side of the controller). Hell, I even started playing the game on easy because I was having a really difficult time learning all of the combos in the game when I first started. The result of implementing these kinds of customization settings is that Bayonetta can be played by a variety of people who possess varying levels of ability. It also means that players like myself who take longer to learn a game’s mechanics have the ability to practice and hone their technique before taking on more involved challenges. I really like that, and because of this I’d have a much easier time recommending Bayonetta to others. It’s a good example of a game that can be easy to pick up and play, but offers a higher level of challenge to those who really want to master it.

Despite the majority of Bayonetta’s palette for the characters and world being red, black, brown, and grey (boring alert) Bayonetta still manages to put on an amazing visual spectacle. The game routinely throws in light mixes of other colours to make the various attacks, weapons and combos deliver a vivid presentation that wouldn’t be had otherwise. Orange, blue, green and purple are frequently used to highlight both attacks from angels and Bayonetta giving them additional contrast to the world. The visual distinction created by the use of colour really helps some of the action sequences in Bayonetta spring to life with some of arrangements being downright incredible to watch in motion. Along with making an optical marvel to watch, it also helps to aid with communicating information to the player during particularly hectic moments. Instead of being completely lost, the use of colour can help to direct the player’s focus, so they do not lose sight of what is going on. Given the fast pace of the combat this is useful to the player and an excellent way to implement the art style into the game’s design. On both an aesthetic and mechanical level the visual styling of Bayonetta is satisfying.

Bayonetta is a game that is deliberately silly, but in a good way. The characters all talk and act like typical action movie bad asses and as a result they feel fabulously exaggerated and outrageous. What made this worth noting is that it melds right into how over the top the game actually is. Given the player spend the majority of the game ripping apart angels who are several times larger than Bayonetta, it feels thematically on point for Luca, Rodan, Jeanne, and Bayonetta to all act like action movie parody characters with overblown personalities.

Accompanying the inflated cast, the mechanics of Bayonetta tie into the game’s theme. Bayonetta heavily rewards players with fantastic chaos if they are able to pull off consecutive counter parries and perfect dodges within their combo strings. This lends to the player feeling a similar sense of badassery as to what Bayonetta portrays. Like Bayonetta, the player is able to pull off these tightly timed maneuvers. It was very satisfying to rip through an encounter with a single string of combos while mitigating all incoming damage. The way both the characters and the mechanics weave into the action movie framing of Bayonetta not only lends to the game being incredibly satisfying to play, but everything about Bayonetta feels like it belongs.

As a rule I do not like quick time events. I find them to be lazy by design and frustrating from a playing perspective. Being able to see my challenge coming and working out how to interact with said challenge is something I enjoy. Having a random button thrown on the screen and being told to react within two seconds is not. There are several instances in Bayonetta where a QTE comes up and holy shit do I hate when it does. It’s especially displeasing because missing some of the QTEs results in an instant death, which depreciates your score at the end of the level. Luckily, the QTEs are the exact same button presses every single time, so once you’ve experienced them once or twice you’ll be prepared. They’re annoying, but after several attempts at a stage I stopped finding them as disheartening because I knew when they were coming. However, that doesn’t stop them from being a mechanical blemish on a game that is otherwise excellent.

I’m not sure if the following was my fault, but as I understood it from the tutorial doing a perfect dodge earned you witch time. Witch time is a mechanic whereby doing a perfect dodge earns the player a few seconds where time is stopped, which can be used to unleash longer, stronger combos. There are certain enemies types and attacks that do not activate witch time regardless of your ability to do a perfect dodge against them. I found this inconsistency to be fairly frustrating as I had been trained to think one way, but forced to respond in a completely different way to deal with a subset of enemies. The use of certain accessories, most notably the Moon of Mahaa-Kalaa an item granting the player the ability to counter parry/attack, helps to mitigate these problem by providing alternative avenues for players to chain their attacks.

I wonder if the inconsistency in what does and doesn’t activate witch time was done to help push the player toward using different weapon and accessory combinations. Doing so can often yield a much higher success rate in dealing with these scenarios than the default load out. Despite this, it ended up making me feel aggravated because I expected the game to respond in the same way throughout the experience. It’s a minor gripe given that experimenting with alternative load outs makes the game more interesting, but is still something that bugged me quite a bit when I initially encountered it. 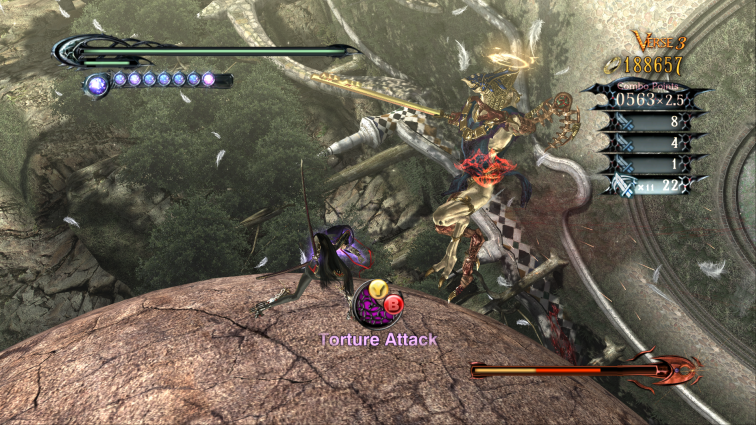 Bayonetta is a game I highly recommended. As stated, I was nervous when I first approached it, but that quickly fell to the wayside when I discovered I could hone my ability to play it using the high level of customization for difficulty. The visual style and pacing of the game on top of the over the top nature of the characters, cut scenes, and the hack and slash sections of the game all had me deeply engaged in Bayonetta. Bayonetta is an outstanding example of how to tie a game’s mechanics, design, and story into a cohesive package and was really fun to play. If you haven’t played it already, consider giving it a look. Bayonetta is a very special game.

One thought on “Bayonetta Review”