Mages of Mystralia is an action adventure game where you follow Zia, a newly budding mage, as she learns to wield her abilities in a coming of age story. The game plays primarily from an isometric viewpoint switching to overhead, or side based angles when appropriate. As a mage you will travel across the land of Mystralia venturing through it’s forests, mountains, and plains to complete a variety of quests. Along the way you’ll discover how to create and alter your own spells to solve a host of puzzles and take on the evil forces that threaten the land. Taking inspiration from other games in the genre,  Mages of Mystralia manages to put a somewhat unique twist on action adventure games.

Spell crafting is my favourite part about Mystralia, and is the reason I was first drawn to the game. Instead of giving players preset abilities, Mages of Mystralia allows players to take the base spells and augment them using a variety of runes. In doing this the spells gain different effects and behaviours, which can be implemented into both puzzle solving and combat elements of the game. I really liked how well utilized spell crafting was within the various challenges throughout the game. Figuring out what runes I needed and in what order I needed to use them was a fairly compelling way to solve the various brain teasers. It was also gratifying when I figured out exactly how I needed to order my runes to solve something. Crafting one’s own arsenal of spells is superbly enjoyable and I wish it was utilized more throughout Mages of Mystralia. There are two really big problems I have with the enemies in Mystralia: variety, and intelligence. Despite featuring a host of environments across the world, Mystralia is fairly barren when it comes to enemy diversity. There are only four or five different models to be found across the game with different colour variations and elemental properties being assigned to their attacks. What’s made even worse is there is a smaller array of baddies in the standard game mode as the fire, ice, wind, and earth attribute monsters only appear in the game’s hard mode. This lack of distinguishable enemy types makes the world feel empty and shallow as I constantly saw the same tired foe designs in every location I visited.

In addition to a cast of enemies that lack diversity, Mystralia has some of the stupidest AI I’ve ever seen in a game. All melee, and all ranged foes fight with the exact same patterns. Those that are melee based will charge up to you and strike, while ranged adversaries will hop around occasionally, but generally keep their distance moving only when the player is right on top of them. What makes things even worse is that because of how predictable the attack patterns are you can very easily lock enemies into an animation loop thus preventing them from moving or counter attacking. Having such pedestrian behaviour repeat over a 10 hour period made combat very repetitive and boring. When you add in the lacking diversity of the available foes the result is a meager host of baddies that feel almost like padding due to how simple and mindlessly the player can roll over them.

Mages of Mystralia has a real big problem with pacing. In my play through of the game I constantly found my progress interrupted by elongated sections of down time. After the first half of the game there is only one place in the game where you can buy a healing item, so if you want to pick one up you need to go out of your way to wander over to the town where they are sold. There are, however, three fast travel locations in the game, and one of them does put you in range of where you can buy the item, but if you aren’t already near one of those fast travel locations you’ve got a bit of walking to do. The same exact problem is true of the mana restoration items. Thanks to all of the backtracking I spent a sizable portion of time after every dungeon restocking all my supplies before I could actually move forward with the game. This felt like wasted time to me and served as a incessant interruption to the pace of the game.

One of the problems I consistently had throughout Mystralia was managing my HP. The reason for this was that healing happens almost exclusively through random item pick ups. The one exception is a healing item you can carry a single unit of called a scarab, which will save you from death the next time you die. What I found so frustrating about this combination of things is how much harder it made keeping my character healthy. I spent time trying to hunt down restorative items in the same way that I’d hunt down food in a survival game. That kind of tedious activity is large part of why I don’t like survival games, and my distaste for it was ever present here.

The frustration I felt with the healing system was made even more so because there are so many better ways healing could have been implemented in Mystralia. Having some kind of potion, having HP restored when you reach a save point, or healing when you’re outside of combat would all provide great alternatives to the system that is in place. As it stands I found the perpetual need to monitor and manage my HP an annoying waste of time that regularly grated on me throughout my experience.

I think it is important to mention some additional context for the information previously listed. I was playing Mages of Mystralia on its harder difficulty and in replaying the game at its standard difficulty I did not find any of what I listed in this section to be a problem. The enemies spawn in much smaller groups, and do not possess any of the crowd control abilities they have in the harder difficulty. In addition, the drop rate for hearts seemed to be a lot higher by comparison. I only have anecdotal information for that, but it seemed like I was constantly finding healing items and I never had need of them due to the decreased combat proficiency of foes. My two biggest problems with Mages of Mystralia’s story are the lack of quality in interpersonal character interaction, and the ending. As one would expect in a coming of age story, Zia has a guide character on her journey. Very early on in the story a character is introduced as Zia’s mentor, and he proceeds to teach her absolutely nothing. Despite never providing guidance to Zia, the narrative of the story still portrays the man as the mentor character. It even goes as far as to not tell you his name so Zia and the player are both forced to continually refer to him as Mentor. Toward the climax of the story your mentor is gravely wounded and at this point the story tries to draw sympathy from the player, but none has actually been earned. Mentor abandoned us to the woods and it was up to a talking spell book to take up the mantle as our teacher and instruct us. Zia still feels bad about him being injured despite there being no reason for her to as the pair never actually spent any time building up a relationship in the story. It feels like a cheap attempt to get an emotional response from the player, and is so flawed in its execution that I almost feel insulted by it. There are other instances of character interaction dissonance happening throughout the story, but this is the most egregious example.

The other part of the story that left me with a really sour taste in my mouth was the ending. After a few predictable plot twists, Zia is able to conquer the final boss and save Mystralia. The victory is short lived though because your talking spell book reveals that all of the events that have happened thus far are exactly as it had predicted. The soul trapped within the pages of the book is able to escape into the body of a nearby mage (another mage – not you) and flee. Despite defeating the immediate threat to the realm, you’ve effectively unleashed a much worse one. The ending feels like an obvious sequel setup and is wholly dissatisfying as a result. What’s even more odd about the decision to do this is that the game could have just ended without any of it happening. After you save the realm things could have just faded to black, which wouldn’t have left me feeling slighted out of additional story content. Between the abrupt ending, and the poor quality of character interaction I really felt like the story in Mages of Mystralia was of poor writing quality and execution. 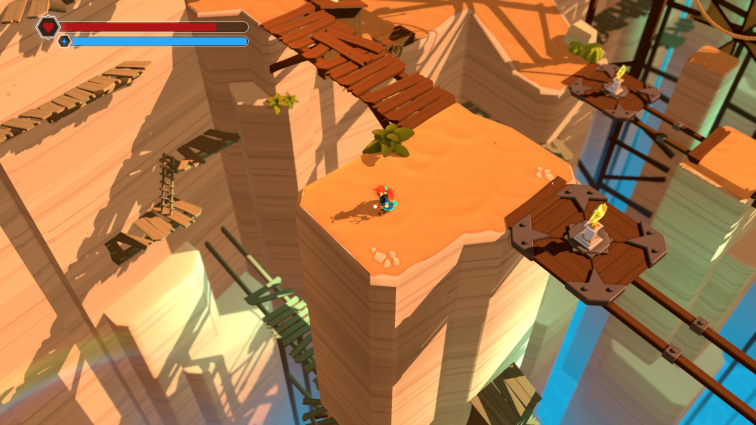 Mages of Mystralia is a game I did not enjoy playing and one that I would not recommend. Despite the very interesting central mechanic of spell crafting, I found too many other things ruined my experience with the game. Poorly written story elements, repetitive enemy design, slow pacing thanks to regular downtime, and an odd choice in how HP is restored all culminated in Mystralia feeling very drawn out and boring to me. I’m sure there are people who would enjoy this game, but I am not one of them.