Snake Pass is a colourful puzzle game where you take control of a snake and humming bird duo named Noodle and Doodle, respectively. The object of the game is to navigate each level finding 3 gate keys to open up the exit and advance to the next level. What makes this interesting is, being a snake, Noodle does not move like a conventional video game character. You’ll be required to think like a snake to slither, twist, and coil Noodle through the various environment based puzzles while advancing through the level. Along the way there are also a series of other collectibles to find hiding in the stages. Snake Pass is very much a game about solving movement based puzzles as you learn to think about how you can move Noodle through the various structures and landscapes.

Snake Pass features a very odd, but unique control method for the main character. Instead of sticking with convention, the game relies on a gimmick whereby players actually have to move like a snake in order to progress through the various levels. This means you have to direct the character back and forth to slither, or weave and coil to climb things. The idea is very perplexing, but also really fun. Moving in an such an odd way brings a new angle to think about when working through puzzles in the environment. I’d imagine to some this control method would be really annoying, but I found it refreshing because of how it challenged me to think about how I was going to get around the level in different ways than what I’m used to.

Despite not possessing jaw dropping visuals, I rather liked the stylistic choices that were taken with Snake Pass. Every level is covered in lush greenery, which really brings it to life. Individual strands of rendered grass, as well as a variety of plants help to make a wonderful display for you to slink past. The real standout, though, is the colour choice for Noodle and the various poles that make up the levels. All of the poles are a shade of brown that is not used anywhere else in the game. Likewise, Noodle is a combination of orange, black, and yellow stripes that isn’t used anywhere else in the game. In doing this both the poles you are to climb and the player character are made visually distinct from the rest of the game. There is never a time where a pole will blend into the environment and be hidden from view, and Noodle also pops out where ever he happens to slither. The visual style works so well because it looks nice and it clearly communicates information to the player. 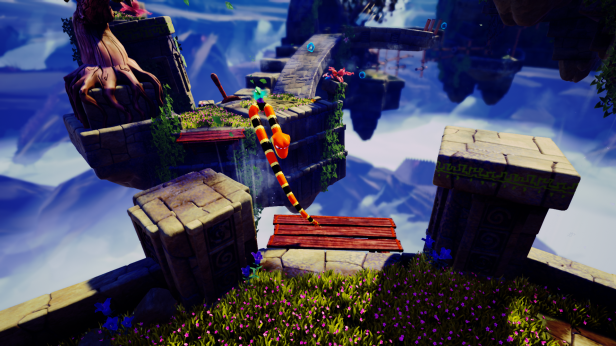 Given that Snake Pass is a one trick pony I appreciated the brisk pace that it moves at. The game features fifteen levels, with new hazards and movement puzzles being introduced every two to three levels. You’re given enough time to come to grips with a new challenge, enjoy it, and then move on. This prevented any one idea from becoming routine thanks to how readily new concepts were introduced. Also, given the game is based primarily around the gimmick of moving like a snake, I wasn’t ever made to resent how odd the controls are because the game wasn’t long and drawn out. Snake Pass shows you everything it has to offer upfront, so you can enjoy the game before it becomes too annoying to fiddle with the controls.

Throughout the fifteen levels of Snake Pass there are a selection of items to collect. There are twenty five objects known as wisps that are scattered around and five coins hidden out of sight in each level. Gathering all of these things awards you with absolutely nothing, which is at the heart of why I do not like the collectibles in Snake Pass. The various trinkets scattered throughout the game do not serve a purpose aside from extending the amount of time that the player can spend with the game. While this may be enjoyable for some people, it feels like a waste to me and I would have liked if Snake Pass implemented collectibles in a more meaningful way. Giving me a reason to want to collect everything such as some kind of reward, or motivation would have gone a long way toward making the collectibles not feel like a waste of time. 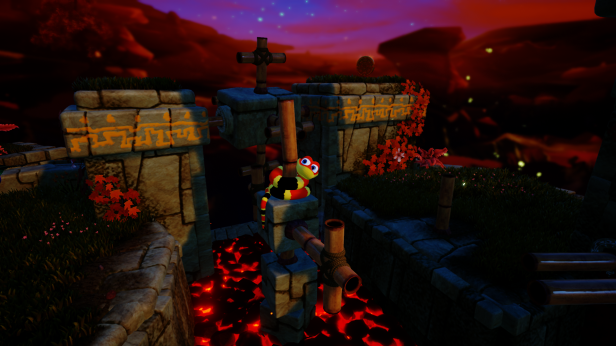 Despite really enjoying the unique control scheme of Snake Pass I did have one major problem with it: prolonged sessions of play would cause my right hand to cramp up. The controls can’t be fully customized, so I didn’t have a way of changing the movement button from the right trigger on the controller to something a little more comfortable to use in extended play sessions. It’s a minor complaint that may not be a problem for some, but having to take a break when I was right in the middle of a level because of a sharp pain in my hand was a bit upsetting. A short break would remedy the problem, though it is still unfortunate that the control scheme caused my hand to cramp up when I just wanted to continue playing more of Snake Pass.

Snake Pass has a few performance issues on the higher graphic settings. While running at a smooth sixty frames per second for parts of the game, it would seem that in some of the later levels I’d run into a hiccup where my machine would drop into the high forty frames per second range. Depending on the use of fire, or water based elements throughout any given level the degradation in performance could last for substantial periods of the level. The problems were fixed when I nuked the bulk of the graphical settings from very high to high where Lucina began to hum quietly while rendering the game with expected results. What blows my mind about this is that Snake Pass doesn’t look like it would take much to run, but it would seem that it pushed my machine beyond it’s capabilities.

Snake Pass is a game I really enjoyed, but I’d have a tough time recommending it to most people. I can see the unique control scheme being very polarizing, which could result in people being put off from it immediately. However, I found the various gimmicks endearing and fun to play around with while they lasted. The vibrant visuals, and quick pacing also helped to paint Snake Pass in a positive light. Useless collectibles, performance hiccups, and hand cramps aside I really enjoyed my time with Snake Pass. If you’re in the market for something with a strange control scheme compared to other available games than this might be worth checking out.