I play a lot of challenging games. Sekiro, Darkest Dungeon, Cuphead, Bayonetta, Meat Boy, Necrodancer, Titan Souls, and Valdis Story are all games that will kick you to the ground and stomp in your teeth when you make a mistake. While I find challenge to be engaging, it’s difficult to strike the perfect balance between something compelling to overcome and something that is frustrating.

The Game Bakers’ Furi is another game which pushes players to overcome adversity. It is a game where you only fight bosses, each with a unique attacking styles which encourages an intimate understanding of the game’s mechanics. However, unlike other games Furi always wants you to feel like success is possible. Through incorporating a handful of clever mechanics there is always potential for victory to be seized from the jaws of defeat. Lets take a dive into how Furi encourages perseverance rather than apathy.

In Furi there are two available defensive options: dodging, or parrying. Dodging is done either by weaving through attacks, or performing a dash. Parrying will counter an attack, but requires a button press just before an attack lands to be successful. One of these options is demonstrably safer than the other. Why would you risk failing a parry when you can avoid an attack entirely?

Luckily the development team at The Game Bakers also realized this and attached an additional incentive to parrying: healing. Every time the player manages to successfully parry a melee strike they are rewarded with the return of some health. While this acts primarily as an incentive to encourage parrying, it also lets careful players claw back their health mid-fight.

Parrying isn’t the only way to recover one’s hit points. Many of the bosses feature bullet hell segments that shower the screen in a colourful barrage of death. You’ll have to carefully weave through the onslaught to survive. But what happens if you make a mistake and are hit? Are you done for?

Thankfully no. Sometimes the bosses shoot out health pickups.

Among the barrage of orange and red projectiles there are occasionally green bullets. If you shoot these bullets they’ll transform into a recovery item that heals a portion of your hit points. Many of the bullet hell segments feature this mechanic, which offers a helpful recovery option in the middle of the chaos. Shooting the other bullet types doesn’t have any negative side effects either, so you can freely shoot into the storm of bullets as you weave over to the healing items. 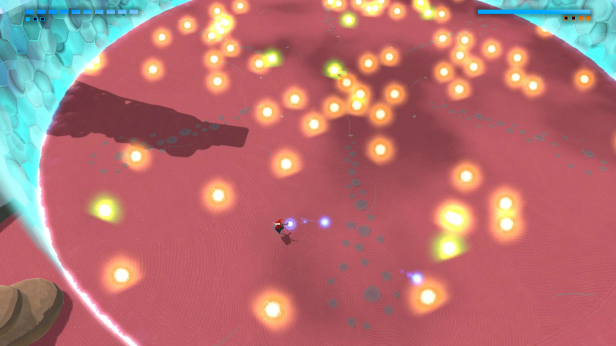 Extra Chances for Each Success

Before this next part I need to establish some contextual information. Each boss fight in Furi is broken up into phases. Subsequent phases increases difficulty by employing more complicated attacking patterns. It is here that we see Furi’s smartest design decision.

Some of the fights in Furi are long and feature several phases. While each phase builds on the previous, the rising difficulty of subsequent phases means there is a good chance players will take several hits trying to overcome new obstacles after advancing in the fight. It would be demoralizing to fail repeatedly in later stages after painstakingly getting to them if Furi didn’t offer a helping hand.

In every fight you’re given three lives, which means you have three chances to overcome the boss. But that’s not entirely true as you are fully healed and receive an additional life, provided you are missing one, after you complete a phase. This alone proves to be a tremendous motivation to keep pressing forward. Each section of the fight conquered provides the player with rewards to help them push further. It’s like the game is letting you know you’re awesome and giving you a boost to help keep you going.

Healing throughout the fight also helps to mitigate issues where the player can get stuck on later phases. Nothing was more frustrating than making a few mistakes early on in a Cuphead boss because I knew I wouldn’t have health to make those mistakes when I returned to where I was struggling. Furi’s system means that you have room to make silly mistakes early on without it being detrimental to the entire fight. 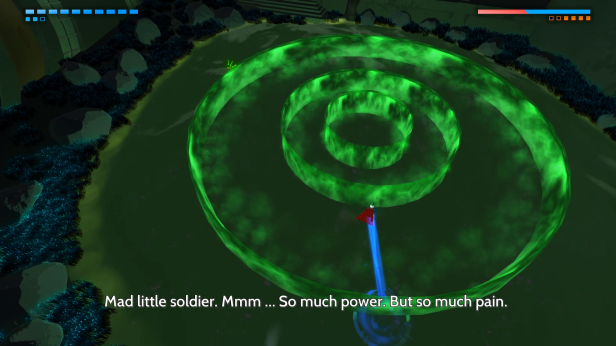 Furi is a game that is no less challenging than any of the other games I listed in the opening paragraph. However, unlike some of those games Furi wants you to keep pushing forward. Throughout each fight a helping hand is always available to provide aid. Both parrying and collecting health pickups can assist with overcoming individual phases of a boss, especially during more challenging moments. After completing said phase, a full heal and extra life await to help propel the player even further. As long as you never stop fighting there is always a chance to snatch victory from the jaws of defeat.

If you never give up, Furi never gives up on you.

3 thoughts on “Making a Comeback in Furi”