Bombservice’s previous game Momodora: Reverie Under the Moonlight is the definition of a hidden gem. I thoroughly enjoyed my initial run-through in 2016, and have replayed it several times in the following years. Does Minoria manage to capture the same essence that made Momodora so good? Well…kinda.

Minoria is a cutesy, anime metroidvania where you play as a nun, Sister Semilla, on a pilgrimage to purge heresy from Ramezia. You’ll primarily be exploring the city’s castle while you dispose of the witches who are attempting a hostile takeover. Along your journey you’ll collect new combat and magic techniques that will help you reach new areas, while also improving your abilities in battle. There are no curve balls here: Minoria is a paint by numbers metroidvania. 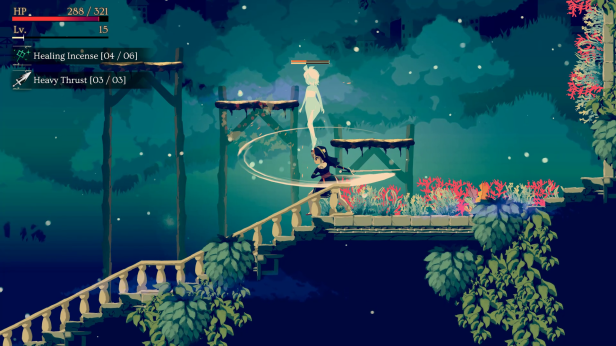 Let’s start with combat as that is something you’ll be doing  a lot of throughout the game. Like it’s predecessor, Minoria keeps things simple. You can strike, dodge, parry, or cast magic. The controls are razor tight, which is good as the bulk of the game is reflex challenges. In fact, the game is so responsive that at times animations are cut short so combat flow is never interrupted. For example, while dodge rolling you can begin the next roll before you finish the previous. The setup is simple, but effective and I appreciate that responsive controls were prioritized over visuals.

My biggest point of contention with the combat, however, is how punishing it is. The cutesy art-style is a facade that will lure you in and stomp your face into the dirt. Don’t presume Minoria is also challenging as it isn’t. Enemy attack patterns are predictable, so avoiding or parrying strikes is easy. Should you misstep however, you’ll lose between thirty and eighty percent of your health. This can lead to frustration as even a minor mistake will be heavily penalized and may even result in progress loss.

Minoria seems to have taken a page or two from Dark Souls with regard to healing and saving. Healing is a spell you can cast, but has a limited number of uses. These charges are only returned when you rest at one of the various save points sprinkled throughout Ramezia. This is also the spot you’ll return to in the event that you perish, which happens a lot. Checkpoints are littered throughout the castle and are always near a boss. Despite Minoria’s best efforts to the contrary, I found these checkpoints relieved a lot of the frustration I’d have felt were they more sparsely placed.

Probably the biggest change from the previous title is the story-telling by way of added writing. Thankfully visual story-telling is still present in Minoria and this is often more effective at communicating than the writing. Several characters unconvincingly tell Semilla that the Church isn’t as righteous as we’re originally led to believe. The moment that really drives this home is when you’re exploring torture chambers located under the grand cathedral in Ramezia. The blood stained walls and distorted corpses convey that the Church may be run by a bunch of bastards much clearer than any dialogue does.

Lore and world building are also bolstered thanks to the added writing. Each character you meet has a brief biography you can comb through. In addition, you’ll collect records about Ramezia’s history and the different locales you visit on your journey. These details are easily digested and help to add much needed context to your quest by elaborating on the history of strife that has existed between the witches and the Church.

And what would a metroidvania be without exploration. Minoria really nails this aspect. You’re not given explicit directions for where to go and as such must carve your own path. The lack of an onscreen map further reinforces the emphasis on exploration. I almost finished the game before finding there is a world map available if you press the left shoulder button, but would recommend against using it. Navigation becomes a core part of the gameplay experience without luxuries like an onscreen map or quest markers and I absolutely reveled in that.

Minoria also, unfortunately, wouldn’t be a metroidvania without token RPG elements like leveling and stats. They are especially superfluous in Minoria as you’ll still get defeated by enemies and thrown into the trash after a few hits regardless of your stats. The enemies increase in power throughout the game, which nullifies any progress you make toward becoming stronger. Likewise, no amount of leveling up changes that most of the game’s enemies die after a few hits, so I was left wondering why stats and leveling were even included.

Finally I’d like to mention the art-style. I liked the pixel-art of the previous game better, but the 3D art has a charm of its own. There are times where it looks a bit odd though. I already mentioned gameplay is prioritized over animation, but there are also times when the lighting looks peculiar. Despite this, I still generally enjoyed the visuals of Minoria. They’re on the darker side, but gave the whole of Ramezia a foreboding feeling. It paired nicely with the oppressive nature of combat to make Minoria look and feel grim even though cute anime girls seem to be most of the world’s population.

Minoria is a game I enjoyed, but I’d be hard pressed to recommend it to most. Responsive controls, visual story-telling, and somewhat obtuse exploration are all things I get a fair amount of enjoyment out of. In that way Minoria checked a lot of the right boxes for me. However, those elements aren’t for everyone and the punishing combat constantly tearing players down isn’t likely to endear the game to anyone who isn’t predisposed to liking it. If you enjoyed Momodora on the harder difficulties I imagine you, like myself, will enjoy Minoria, but others will want to steer clear.