Earlier this year I played the 2014 game Detective Grimoire. Were you to tell me that I’d later be playing a sequel for it I’d have called you a liar. I’m very excited I was wrong.

Tangle Tower is a detective adventure where you once again step into the shoes of Detective Grimoire to solve a murder. You’ll be exploring the scene of the crime, collecting evidence, and making deductions as you uncover the truth. The premise is simple: Freya Fellow was murdered within the eponymous Tangle Tower and no one has left the island where it resides since. You are not alone in your pursuit of truth however, as you’re joined by Sally Spears, which gives the whole of Tangle Tower a buddy cop framing for its story. Will you be able to uncover the truth in time?

If it wasn’t already clear, the bulk of your time with Grimoire and Sally will be spent combing Tangle Tower, while cross examining the statements and evidence you collect. It is because of this that I’m happy to report that the art is fantastic. Each room of the tower looks fantastic and makes great use of colour to highlight various smaller details. You’ll be given plenty of time to take in the whole of the tower as you collect evidence, so the great art makes the whole thing a more pleasant experience.

The sound work, particularly the voice acting is also incredibly well done. Each character already felt distinct because of their unique visual designs, but the voice acting is what allows each to truly shine. A quirky sort of charisma flows as each resident of Tangle Tower provides their own account of what happened and inadvertently pokes holes in the statements provided by the other suspects. The voice work gives Tangle Tower a lot of its charm and helps to spice up what would otherwise be several paragraphs of text.

The final aspect that Tangle Tower nails is deductions. Similar to the previous game, once you’ve been handed enough suspicious information you’re asked to make a deduction. You’ll have to combine various phrases with pieces of evidence to formulate a complete thought. The implementation of this deduction system results in players making their own deduction about the case rather than the game spoiling the fun by providing the answer in a multiple choice list. 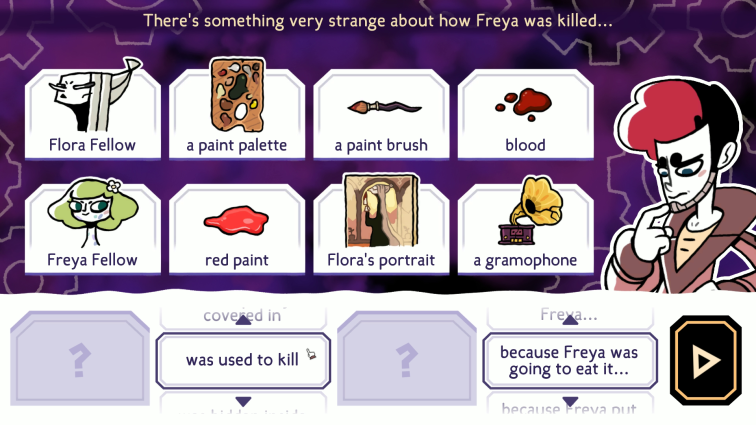 There are a few short falls in Tangle Tower however, such as the story. I’m going to immediately contradict myself by saying that most of the story is well written. The case you’re trying to solve is setup as a locked-room mystery. I’m a really big fan of these kinds of problems as they often invalidate all of the obvious solutions to the problem at hand and requires thinking outside the box. In this regard Tangle Tower succeeds in spades by providing a compelling and interesting murder to solve.

It is the ending where Tangle Tower trips over itself and lands squarely face down in the dirt. For as satisfying as the journey ends up being, the ending of the game leaves a sour taste upon completion. The solution to the murder is great, but the perpetrator’s motivation is nonsense. The crime committed doesn’t feel like it had any reason to happen. If the guilty party had done the deed because they liked killing it’d have landed better than the provided explanation. A lot of the fun in a detective game comes from the resolution and in Tangle Tower’s case it feels a bit weak which lets the whole experience down.

The only other point to mention is that with Tangle Tower being an adventure game it is a bit of a slow burn. Even at the high points you’re still plodding along through the case solving one problem after another. It’s a leisurely experience which doesn’t manage to outstay its welcome, but I felt like the climax could have had a bit more oomph.

Even though Tangle Tower doesn’t exactly stick the landing I still enjoyed it enough to recommend it. It’s a light-hearted detective adventure, with its strengths firmly rooted in making the journey through its locked-room mystery as enjoyable as possible. The great art, voice acting, and deduction system all make the case you’re trying to solve fairly enjoyable. If you’re a fan of detective games, or want a leisurely paced game to play on a cozy Saturday afternoon Tangle Tower is worth a look.