We’ve made it through the first month of the year and wouldn’t you know nothing has changed. As much as we’d like to think that flipping the calendar over to a new year opens the door to new possibilities it really doesn’t. The continued existence of COVID-19 and the lockdown that was recently re-imposed on my local area (with good reason) have only helped to reinforce that. Anyway, video games!

It looks as though we’re starting January off on a high note. View wise this was my best month ever. For now I’ll take that as a sign that I’m doing something right and will continue trudging along.

Generally, I felt like my blog didn’t have enough video game related content. Almost all of my content relates to video games in some way, but December had a lot of self-reflection style posts where I looked back on 2020 and I wasn’t writing about what I’d been playing. As such, I posted nothing but strictly video game related content in January. I had the first entry in what I hope will be an on-going series of reviews (You Should Play) and also wrote my first game design-opinion-feature piece of the year. Here’s hoping I can keep the momentum going.

January was a month with a lot of gaming replays for me. While watching Kim and Pete stream the KFC dating sim game I decided I wanted to play a dating sim game again and my choices were between Huniepop and Hatoful Boyfriend. I opted for Huniepop as it has more substance as a game and I had a lot of fun going through it again.

Huniepop is a really weird title. Most people know about it because of the adult content present in the game, but what rarely gets mentioned is how good of a match three title it is. By all accounts developer Huniepot could have put out a barebones, low-effort title filled with adult content and people would have bought it. Instead, it was actually fleshed out to where it can be played and enjoyed beyond the adult content as a fun match-three game.

I also recently found out that Huniepop 2 comes out a week after this article goes live. It was a nice bit of serendipity that I revisited the original title shortly before I’ll be playing through the sequel.

Every Tuesday for the past two months my evenings have been filled with watching Ian from Adventure Rules play through Fire Emblem: Path of Radiance. This got me in the mood for Fire Emblem, so I decided to pick up Awakening (the only Fire Emblem game I own) for the fifth time. I have once again concluded that Awakening is sub-par owing to a lot of poor design decisions some of which are core to Fire Emblem while others which are unique to Awakening.

From a tactics perspective Awakening starts off solid, but by the mid-point of the story becomes entirely brainless. Your characters get stronger after each chapter and eventually hit a point where they’re a lot stronger than the enemies you’re fighting against, which allows players to brute force their way through the game. What’s worse is enemy units have no sense of self preservation so they’ll challenge your units to battle even if they will almost certainly lose. Both of these forces combine to create a very dissatisfying tactical experience that becomes more and more thoughtless the further into the game you get.

Awakening also features some very questionable writing. As characters fight together in battle they grow closer and unlock sub-stories known as support conversations. In past games you could only unlock conversations between compatible characters. While this is true in Awakening, romantic partner options were expanded such that almost any character can romance any other character of the opposite gender. This leads to a quantity over quality problem where the majority of support conversations don’t convey anything meaningful about either character involved. This also means that two characters with zero chemistry can end up romancing one another. It’s poorly handled, which is even more apparent to me now having seen how much better handled this aspect was in older entries.

Awakening’s story also makes no sense. I’m about to drop massive spoilers, so skip the following paragraph if you want to play this train-wreak blind.

In the very first mission Chrom finds Robin with no memory of who they are. Toward the end of the game it is revealed that Robin lost their memory when a future version of Robin tried to merge with the present day Robin. Future Robin indicates they came to the past with Lucina who we see come from the future in the third mission. So how did future Robin accidentally destroy current day Robin’s memory before the first mission if they hadn’t travelled to the past until the third mission? If you’re going to make a story with time-travel elements you NEED a consistent timeline of events otherwise your entire story will be derailed.

What I outlined above is just one of many story related issues. The general flow of events and specific character motivations also start making a lot less sense when you think about them for any amount of time.

January was not a great month for me. Contrary to how it may seem the lockdown and work took a bit of a negative toll on me and that left me feeling a bit burned out. And what do we do when we’re burned out? We slip back into playing games that we really enjoy.

Despite my numerous misgivings with World (specifically those related to Iceborne) I still enjoy the hell out of this game. It was great to go back and continue playing it when I was feeling like garbage. It was also nice to see some people giving Monster Hunter a try for the first time with Rise, which is partly what got my brain targeted on Monster Hunter (again) in the first place.

If only Capcom would fix the netcode and add crossplay…

The more I play of Like A Dragon the more I dislike it. There is a great game here that has all of the same attributes I loved about Yakuza 0, but it is buried under a mountain of RPG bullshit. Just about every aspect of RPGs that I don’t like is present in this game and implemented in such a way that it rubs me up in all the wrong ways. It is no longer surprising to me that only twenty-six percent of Steam players have even finished this game as I don’t really know if I’d say it is worth pushing through all the bullshit to see the story to completion.

Editor’s notes: I finished the game while editing this post and am too lazy to rewrite everything, but I can say with certainty that the story isn’t worth pushing through all the crap.

I may have played Like A Dragon because I was curious how the RPG elements would shake up the Yakuza formula, but I’m entirely disappointed in what the dev team managed to come up with. The RPG elements feel as though they were tacked on with very little thought for how they’d actually affect the gameplay and Like A Dragon is a far worse experience for it.

Because I was feeling so emotionally drained I didn’t do a lot of art in January. I do like what I managed to make though, so that’s something.

I think I’d like to keep experimenting with colour. I’m so used to doing sketch type work that I often forget that colour is a huge component of a piece. I know that sounds like it should be obvious, but if you colour something well you can trick a lot of people into thinking it looks good even if you were fucking lazy on sketching certain parts of it.

Here’s five articles from around the community over the past month that you should read if you haven’t already. I know last month I included a brief little description for each of them, but when I re-read the descriptions I disliked what I’d written. The articles speak for themselves if you take the time to read them. so just…fucking read the articles.

Kim | Later Levels – Do walkthroughs make you a bad gamer?

Jett | In Third Person – Moving to PC as My Fighting Game Platform of Choice?

Meghan | Meghan Plays Games – Among Us: the Trials and Tribulations of Public Lobbies

Well I think that about wraps it up for January. Here’s hoping I actually finish Yakuza, get back into art, can push through season depression: lockdown edition, and can work through the backlog of games I made for myself with the Steam holiday sale.

Stay safe out there and thank you for reading.

8 thoughts on “Month in Review – January” 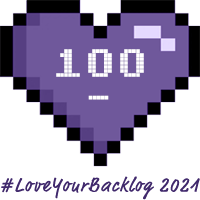