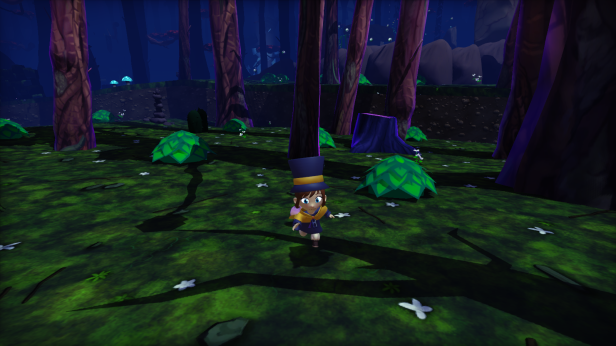 A Hat in Time offers an experience reminiscent of platforming games from the late 90s from which it heavily draws inspiration from. You take control of Hat Kid, a hat wearing time traveler, in a quest to recover the Time Pieces that she uses to power her time travelling space ship. Across four brightly coloured levels, Hat Kid will take on an array of mission types including exploration, platforming, and even survival horror. Along with collecting Time Pieces, there are a selection of new hats to find that provide Hat Kid with additional abilities to assist in the aforementioned missions. Moreover, passive abilities can be gained by finding and equipping badges to your hat throughout your journey. What’s old is new again with A Hat in Time updating just enough from older 3D platforming games to play comfortably by modern standards, while also retaining the same charm that made those games so memorable. 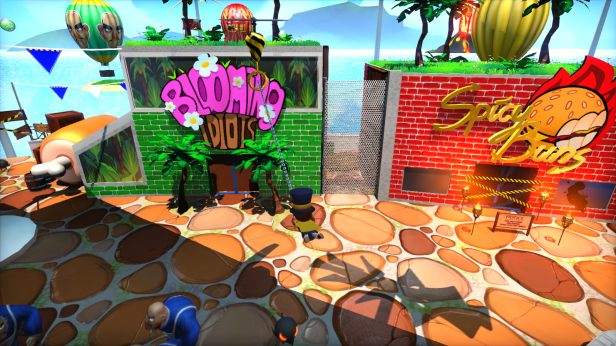 Everything about A Hat in Time works well within the context of its world. The game is designed in a way that evokes the same charm and whimsy as the games it takes inspiration from. Hat Kid is very animated in the way she acts, and so are the many other cast members found throughout the game. Dialogue is just as cartoonish and outrageous, so even in instances where something said is fairly ridiculous it doesn’t feel out of place. The combined effort of these exaggerated characters in a bright, and glowing world is an excellent sense of cohesion that carries through the whole game.

One of my favourite things about A Hat in Time was the amount of variety on offer. Each chapter in the game features a number of different missions that have you exploring every corner of the landscape.  You’ll be made to deliver mail while riding on a scooter, looking for a series of collectibles, or even completing a platforming challenge. Having a variable selection of quests gives a feeling of freshness to each return visit of any given level. Nothing ever felt stale in A Hat in Time because each visit asks something different from the player, while encouraging them to continue exploring.

In addition to mission diversity, the vastly different aesthetic and atmosphere of each of the game’s worlds adds to A Hat in Time’s variety. Despite there only being four worlds in the game, each has its own distinct look and feel. The level layout, choice of colour, NPC designs, and objectives all help to accentuate how unique each of the environments are when contrasted against one another. Similar to the variable assembly of quests, the inclusion of such distinct worlds to explore adds diversity to the many treks made through each area, and the experience is far more enjoyable for it.

A Hat in Time is incredibly well paced. The game constantly keeps you moving and there is very little down time throughout. Most missions take between ten and twenty minutes to complete, and then you’re off to the next one. There is also a hint system by way of your top hat’s passive ability, which will help to point you in the right direction in the event that you ever become lost. This can make it a lot less challenging to play, but it prevents levels from becoming slow and frustratingly dull. When combined these elements make sure you’re able to move at a brisk pace, and help to prevent elongated periods of wandering.

In addition to the relatively quick run time of most quests, A Hat in Time doesn’t force players to gather all of the collectible items scattered throughout the world. If spending hours finding every last item is your thing then you are more than able to go about collecting everything. However, after a certain point in A Hat in Time certain items are no longer required to progress forward. I really liked this as I was never forced to stop doing new missions and go off on a hunt for random doodads to keep moving the game forward. I was able to find everything required through organically exploring each area as I played through any given chapter. Between finding items naturally, and the length of most missions I found A Hat in Time to have an excellent sense of pacing.

I’ve eluded to it already, but I found A Hat in Time to be a charming game. Many of its elements caused me to smile, or laugh out loud due to how adorable and silly they were. Most often this was caused by a particular animation, but other times it was a tongue and cheek line of dialogue. Hat Kid herself is a prime example as she doesn’t speak a whole lot, but is routinely very expressive in an endearing manner. My favourite thing she does is stick her tongue out in a taunting gesture whenever members of the Mafia are around. It’s things such as Hat Kid occasionally taunting the mafia that gives A Hat in Time so much of its charm, and make it such an enjoyable game to play.

A well fleshed out options menu is always something I appreciate and A Hat in Time has one of the best options menus I’ve seen in a long time. Sound configuration, gameplay related settings, and a full suite of graphical options are available for the player to tweak and adjust to their specific preferences. Are you not a fan of motion blur? How about bloom? Do you have a preference as to the draw distance, or level of anisotropic filtering? All of these options and more can be tweaked. What makes this so nice is that if there is a particular visual effect, or setting that negatively impacts your playing experience you can very easily adjust it. Giving the player such a level of control over their experience with the game is a huge boon and is something I felt was worth commending.

The camera in A Hat in Time was my greatest enemy. By default it is set to auto follow and adjust contextually. The result was a camera that would follow you as you jump around in a 3D space, so the camera is always set behind you. However, with how often the camera swivels around I found it giving me a motion sickness problem. There were also a few instances where I had it bug out on me and move into the surrounding environment, so I wasn’t able to see. Luckily, this setting can be disabled, which enables the camera to be manually controlled. When I was given full control over the camera I had a much smoother experience throughout the remainder of A Hat in Time.

The depth of field option in A Hat in Time is, in my opinion, poorly implemented. I believe this because of the distance at which the filter is applied. I routinely found myself unable to see anything in the distance while using high vantage points to survey an area because the depth of field would obscure far too much. Despite having many other configurable options, adjusting how far out the depth of field is applied isn’t one of them. As a result, once I become frustrated enough with it, I disabled depth of field entirely. I don’t believe it had a huge impact on the game’s overall appearance and there was no noticeable performance change, so disabling it was a net positive for me. While I found depth of field to be poorly implemented, the ability to remove it from the game is present, so this isn’t a huge sticking point against the game. 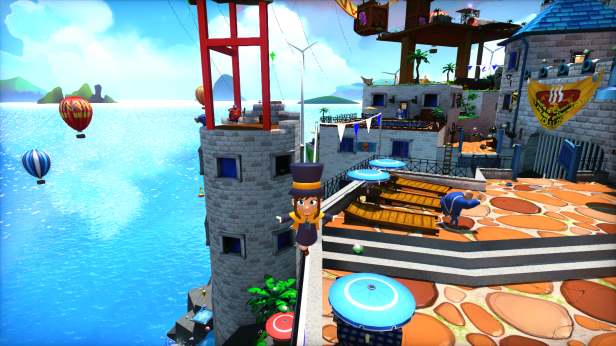 A Hat in Time is a game that I adore and would most definitely recommend. The cohesion, variety, and pacing all seem carefully designed to fix problems of older 3D platformers such as worlds feeling too disparate, and too great of an emphasis being put on collecting every single thing. When combined with the charm of A Hat in Time the resulting game is plain and simply quite fun. The addition of a fully fleshed out options menu for a high degree of player customization is the cherry on top of this wonderful experience. It is because of the inclusion of a fully fleshed out options menu that I was able to fix the two biggest problems I had while playing A Hat in Time. If you are a fan of the 3D platfomers from the 90s, or you’re just looking for a light hearted, adorable game to play then A Hat in Time is certainly a game you should look into purchasing.