Have you ever played a game where upon completion you sat there with a bewildered look on your face wondering what just happened? That was Indivisible. Buckle up. This is going to be an interesting one.

Indivisible is an RPG and platforming hybrid, which may sound like a bit of a contradictory pairing. You’ll explore by overcoming various platforming obstacles, while collecting new abilities that expand what you’re capable of. The RPG segments are the rest of the game. You’ll be fighting foes in pseudo turn-based combat, taking on quests, and gathering a party of like-minded heroes. This is all framed from the perspective of Ajna: a hot-headed teen with mysterious latent powers who inadvertently triggers the end of the world. While initially refreshing, Indivisible has some oversights, which lead to a fairly inconsistent experience. 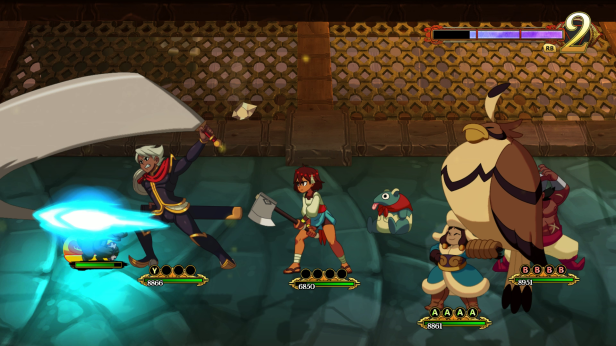 Let’s begin by examining the game’s combat. Indivisible employs a few twists on the traditional turn-based formula. Instead of turns, every character has a set number of actions which recharge over time. In most cases these are attacks, but certain cast members also have buffs, debuffs, or healing abilities. How and when you use each of your party members becomes a core aspect of battle as there aren’t defined turns. You’re also able to block in real-time when enemies counter attack. While not an original innovation, the active elements in Indivisible’s combat allow it to be more engaging than menu based combat found in other RPGs.

Unfortunately, enjoyable as the combat is initially, Indivisible drops off further into the game. Most fights are a one and done affair meaning there isn’t any grinding. Despite this, the pacing of combat slows to a crawl after the climax in the first act. Almost every encounter from here forward is a monotonous grind due to how much health enemies have. What’s worse is your foes seldom fight back, so combat loses any sense of challenge. This fatal combination had me actively avoiding unnecessary battles as I didn’t want to waste my time on yet another brainless fight.

The platforming has the inverse problem of combat. For the first several hours the hardest thing you’ll do is jump over a gap where there is no consequence to falling. Harder platforming will be thrown at the player out of nowhere asking far more of them than any of the prior challenges. While I enjoyed the challenge, the abrupt difficulty spike is likely to throw many players. What’s worse is following these jumps in challenge the platforming returns to the mundane, which makes Indivisible feel inconsistent. 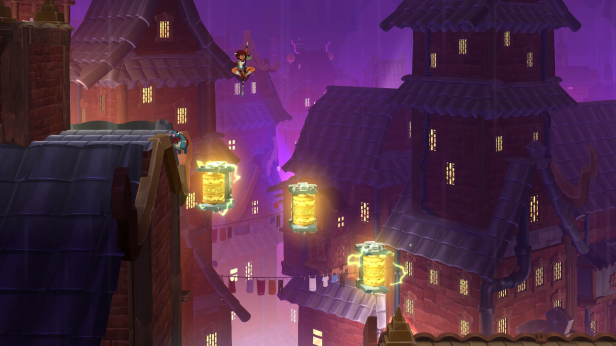 With the gameplay being lackluster, it sours me to report the story elements of Indivisible are also on the weaker side. Along her journey, Ajna meets a wide cast of characters. With so many cast members it’s unfortunate that most of them don’t have much impact on the story. Upon meeting each they’ll tell you their backstory before tagging along for the rest of the journey. Aside from sidequests or combative advantages, these characters serve little other relevance which feels like a huge missed opportunity.

There is one exception to my gripe with the secondary characters: Dhar. He acts as the catalyst for why Ajna sets out from her village. Dhar shows up with a battalion of soldiers and burns the whole place down, killing Ajna’s father in the process. Due to circumstances outside of either his or Ajna’s control he ends up stuck working with her, which neither of them is pleased about. Throughout the game he has his world views changed, comes to terms with his past misgivings, and apologies to Ajna vowing to serve her as penance. Dhar’s journey is what Indivisible needed more of and it’s a shame that his character arc is an exception rather than the norm.

Speaking of character arcs, let’s mention the main weakness of Indivisible’s writing: Ajna. While I understand she is a hot-headed teen, Ajna is painfully annoying for the overwhelming majority of the game. The secondary cast don’t get much time in the limelight because of how quick Ajna is to steal it back and chastise them whenever she is challenged. What’s worse is she doesn’t appear to learn from any of her mistakes even after someone points them out. In contrast to Dhar, Ajna appears especially brash and her lack of character development through most of Indivisible drags down the experience.

The exploration is also lackluster. Indivisible is built around players backtracking with their new abilities. They’ll be searching for collectibles which are used to upgrade their party. While I usually revel in this kind of exploration, I found it tedious due to how long it took to get around. The seven fast travel spots aren’t evenly distributed throughout the large world map. Most are secluded away from points of interest while others are within a short walking distance of one another. This made getting around more painful than it ought to be.

Not to dwell on negativity, let’s talk about something Indivisible does well: art. I’m sure you can tell from the included screenshots that the artwork in Indivisible is top-notch. Every single character has vibrant hand-drawn animation and tons of smearing frames. The visuals are a joy to behold and easily the strongest aspect of Indivisible.

The soundtrack is also stellar. Each song really helps to set the mood of an area or the tone of a conversation. Some are even catchy outside the context of the game. If nothing else the music left me wanting the accompanying gameplay and story moments to be better realized.

Finally, bugs. Indivisible crashed on me four times. It usually happened when transitioning from gameplay to a cutscene, or vice versa. This was especially frustrating as most cutscenes followed a mountain of dialogue, or one of the few challenging boss fights. Having to repeat these segments was especially tedious as Indivisible was already outstaying its welcome. 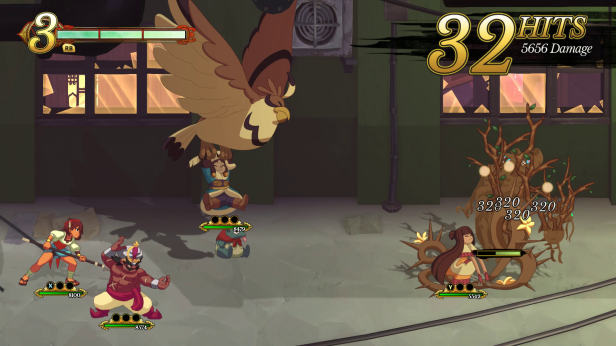 Indivisible is a great example of how a project can collapse under its own ambition. While at times the combat, platforming, and character writing are well executed, there are more instances to the contrary. Combat fails to remain challenging, platforming difficulty frequently fluctuates, and most of the potential writing opportunities are squandered. It’s a shame that the excellent art and sound direction weren’t applied to a more well realized project. When you factor in a decidedly unlikable leading lady, tedious exploration, and the overall inconsistency of its various gameplay elements it’s hard to recommend Indivisible.