I’ve recently been playing a lot of Slay the Spire. Between writing about it for my year end wrap up and the (relatively) recent version two patch I’ve been having a ton of fun playing it. All of my recent playtime has been spent on raising my ascension levels and that’s gotten me thinking about how difficulty can be used as a tool to teach the player about a game’s depth.

First off, what is an ascension level? Ascension levels are how Slay the Spire modulates challenge. Once you’ve beaten a full run on the default difficulty you’re able to turn on ascension levels to add discrete modifiers that marginally ramp up how challenging a run is. These modifiers include, but aren’t limited to, increasing the spawn rate of elite enemies (mini-bosses), increasing damage output for specific types of enemies, reducing the volume of healing received, and adding a negative curse card into your starting deck.

The other notable bit with ascension levels is that they stack. This means that each subsequent level has all of the effects from the previous levels in addition to whatever new modification it has introduced. This leads to what would be a series of easy hurdles combining to becomes a much more daunting challenge. 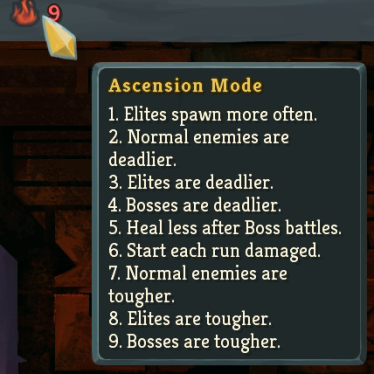 So why would anyone want to partake in these ascension levels anyway? I will admit that in the beginning I only tried out ascension one, which adds more elite enemies, out of curiosity and thought it was the worst thing in the world. It made a game I already found fairly challenging even more so. But eventually I got better at fighting the elites that I previously struggled with and ascension one was no longer challenging. When that happened I bumped up to ascension two, and the process repeated.

Eventually it dawned on me that I was learning more about the game’s systems and how to play it better with each subsequent increase in difficulty. Being forced to deal with more elites meant I had to rethink which cards I added to my deck and how I played them out. As I’ve continued to ascend I’ve been forced to re-evaluate cards I previously believed to be without use and discovered synergies I didn’t have any knowledge of. Slay the Spire’s difficulty hasn’t just created a greater challenge for me to overcome – it’s also taught me a lot more about the game.

The best part about all of this is that each of the ascension levels only makes Slay the Spire marginally more difficult. There isn’t ever a steep increase in difficulty: rather there are several small steps. This helps to minimize frustration as you’re able to slowly improve with each of these discrete changes and bump up the difficulty once you feel you’re ready.

After realizing all of this it got me thinking: why don’t other games do this? We see a lot of focus on accessibility when it comes to the discourse of difficulty, but I think there could be some value in asking games to be better teachers. I’ve never personally been able to find the motivation to dive into Dark Souls, but many who have are able to discover all of the depth and nuance that the various systems within the game lend toward. If Dark Souls had more clearly defined difficulty modulation in the same way that Slay the Spire does it might be easier for more people to get into and understand it.

And don’t takes this to mean I think that only harder games should be better teachers as there are games where the easier difficulties go too far in the opposite direction. I’ve played some games where the easier difficulties fail to utilize critical mechanics. This led to a lot of confusion when I eventually bumped up the difficulty and discovered I’d been learning said game incorrectly up to that point.

It isn’t like this idea is new either. All of Supergiant Games‘ releases that I’ve played (everything except Hades)¹ have featured a difficulty system like this. You’re able to add modifiers that by themselves aren’t necessarily hard, but combine to much greater effect. And by enabling them you slowly learn more about the game’s systems and how to play better. So even story driven experiences can use this kind of modulation, instead of it being relegated exclusively to games like Slay the Spire. I think difficulty modifiers that slowly increase the players understanding of the depth in a game could hold a lot of value. Easing players in, rather than expecting them to take the plunge, might help to entice those who can’t get over some of the larger learning curves that deeper games have. It could also help to reshape how games teach us about their mechanics and systems, regardless of how difficult they are. Personally I’d like to see more of it rather than the established trend of a few static difficulty settings with nondescript names.

Where do you stand on this? Would you like to see more granular difficulty options in games? Do you like the way difficulty is handled right now in games? Let’s argue about it in the comments section.

1. I have now played Hades and can confirm the modular difficulty that I referenced above is indeed present within it as well.